For Dino's 7th birthday, we got him a Bible. Not another Bible storybook (though we have several really good ones) - a real, complete Bible. I have gotten each of my little sisters a Bible when they turned 7, with their name embossed on the front and a zippered cover to protect it when it gets flung around amongst their toys. At 7 years old, they are old enough to read some and to follow along when someone else reads.

The worship service at our church includes everyone together during prayers, announcements, singing, and offering. Before the sermon, they invite the 3-6 year olds to the steps in front of the stage for a children's sermon. This is almost always a condensed version of the preacher's sermon, focusing on the main topic or verse, but in a way they can understand. Then these young children are taken up for children's church, where they will do an activity and talk more about that Sunday's theme while the preacher gives his sermon in the sanctuary.

I absolutely love that this church sees the importance of worshipping as a family. It is important for children to see their parents worship God, to see how the church works, to know the songs and traditions that speak to our hearts. I love that this church also acknowledges that a 7-year-old child has been in school long enough to sit still for another half-hour and follow along with the sermon. He may need a small coloring book and crayons handed over from my church bag at some point if the sermon gets too long and he gets too restless, but I know he is still listening, even if he doesn't yet fully understand.

I have always given the NIV Adventure Bible, because that is what I had as a child, too. Dino loves, just like I did, all the little extras in that publication - highlighted verses, explanations about ancient money and measurements, colorful maps, and insights for the morals of the stories. That first Sunday, he was so excited to sit with us through the whole service, and for me to turn his Bible to the pastor's sermon verses. He got a little frustrated, though, when the pastor skipped around through the long passage, just reading one or two verses at a time then pausing to discuss them - I guess Dino expected him to read straight through and be done!

That week, we had Communion. This church celebrates The Lord's Supper the first Sunday of each quarter. I grew up in a church that served the bread and juice of Communion every Sunday, as a continual reminder of Jesus' sacrifice for our sins each week. "For whenever you eat this bread and drink this cup, you proclaim the Lord’s death until he comes." (I Cor. 11:26 NIV) "On the first day of the week we came together to break bread. Paul spoke to the people and, because he intended to leave the next day, kept on talking until midnight." (Acts 20:7 NIV)

The sermon that day was from I Corinthians 11:17-24, on properly revering The Lord's Supper, ensuring that our hearts are right with God before partaking. I am sure Dino has seen Communion in church, but it has probably been a while. He was wide-eyed, asking what was going on. While the elements were being passed out, I read to him quietly from Luke 22 (in his own Bible!), explaining what the bread and juice represent, and talking to him again about Jesus' sacrifice. He was satisfied with the explanation that those who have been baptized are the ones who receive communion.

Email ThisBlogThis!Share to TwitterShare to FacebookShare to Pinterest
Labels: thoughts

I made Dino's birthday cupcakes in ice cream cones! 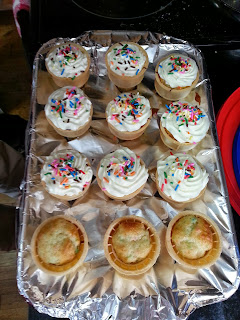 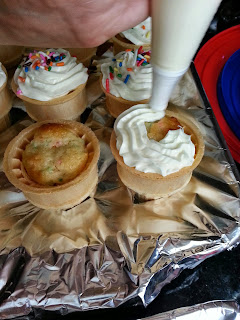 I said I wasn't sure how I was going to transport them to school, then Tim disappeared into the garage for the rest of the day! He made a beautiful carrier from walnut and ash, and finished it with food safe oil. 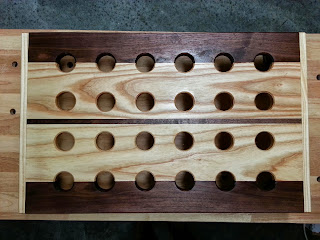 The carrier was a hit with the teachers, and the conecakes were a hit with the kids! He had Funfetti cake with vanilla frosting and sprinkles. One of the kids said it was like eating a rainbow! 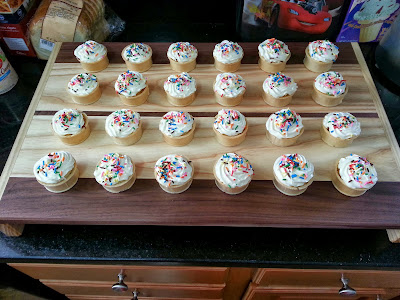 Preheat oven to temperature on box, and mix the cake batter according to the directions on the box.

Cover 2 empty 9x13-inch cake pans or casserole dishes with aluminum foil. Poke 12 holes in each with a sharp knife (make X shaped holes). Place one cone in each hole. The foil will keep them upright.

Fill each cone 1/2 to 2/3 with cake batter, just above the line where the cone gets larger. The easiest way to fill them is to put the batter in a piping bag, or a freezer ziploc bag and cut a small corner off the bottom.

Place in oven, making sure to keep the cones upright (if a cone is tipped, the cupcake will bake tipped). Bake until slightly golden and a toothpick comes out clean (oddly, my glass casserole took about 5 minutes longer than the metal cake pan).

*you can use your own homemade cake recipe, of course, but make sure you use one that isn't too moist so that the cones won't get too soggy
**flat-bottomed "cake cones" not pointy "sugar cones"
by Amy at 19:00 No comments:

Email ThisBlogThis!Share to TwitterShare to FacebookShare to Pinterest
Labels: Amy Can Cook 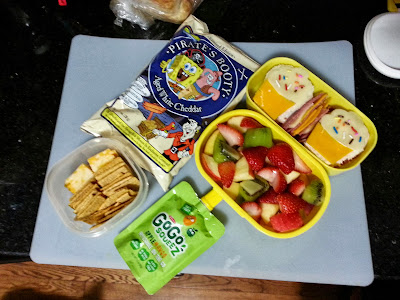 Dino had several of his favorite foods for his birthday bento!
For snack, he had colby jack cheese, Wheat Thins, and GoGo Squeez applesauce.
For lunch, he had Pirate's Booty (cheese flavored puffed corn), fruit salad, and cupcake-shaped sandwiches!

The fruit salad has cantaloupe, honeydew melon, peaches, apples, kiwi, and strawberries.
The sandwiches have salami and turkey inside. I used colby cheese and monterey jack cheese on top to make them look like birthday cupcakes! The sprinkles were cute but he said they didn't taste good with the cheese (as expected...). I used a little mayonnaise on top of the bread to "glue" the cheese to the top of the sandwich. The "scraps" from the cut-out meat and cheese are stacked in between the sandwiches. 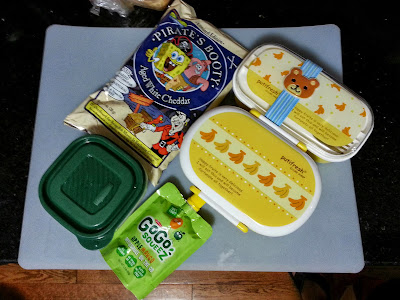 Here it is all boxed up. I let him use some of my bento boxes today, because we got him a new lunch bag that we found would only fit narrow containers! 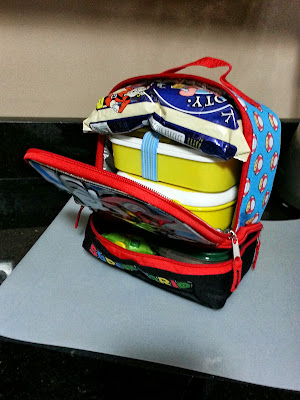 All packed up in his new Mario lunch bag!

Disclaimer: this post has no product links, and I was not compensated for any part of this post.
by Amy at 19:00 No comments:

Email ThisBlogThis!Share to TwitterShare to FacebookShare to Pinterest
Labels: bento

We had an abundance of canned diced potatoes in the pantry, so I made up a couple of new recipes.

First I cooked 2 chicken breasts in a skillet with a little oil until cooked through. I diced the cooked chicken and added it back to the pan with a can of diced potatoes. I seasoned them with garlic salt, pepper, and Italian herbs. Stir frequently to keep the potatoes from sticking. While the chicken was cooking, I put 1 Tbs butter in a saucepan. When the butter had melted, I added 1 Tbs cornstarch. I stirred that with a whisk for a minute then poured in 1 cup of milk and simmered that over medium-low until thickened. Then I removed the white sauce from the heat an added cheese - I put in 2 slices each of American and Colby Jack cheeses, and about 2 Tbs Parmesan. I also added a spoonful of sour cream. When the cheese was melted, I poured the cheese sauce over the chicken and potatoes and stirred it all up.

Dino loved this Cheesy Chicken and Potatoes! But I forgot to take a picture...

The next dish I made with the canned diced potatoes was a broccoli frittata: 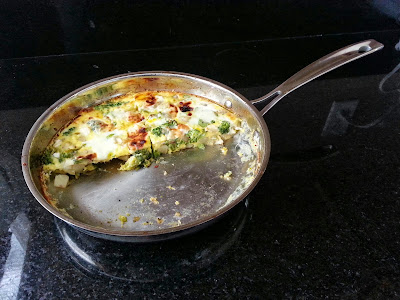 DIRECTIONS
Preheat oven to 425 degrees F. Melt the butter in an oven-safe skillet and add the potatoes. Stir often to keep them from sticking. Thaw the broccoli in the microwave, cut into small pieces if needed, and add to the skillet. Season with salt and pepper to taste. Whisk the eggs and milk in a bowl. Once the potatoes and broccoli are hot, remove from the heat, top with cheese, and gently pour the egg mixture all over the potato mixture. Immediately place the skillet in the hot oven and bake until almost set, about 10 minutes, turning the oven to "broil" for the last minute to really puff it up and finish setting the eggs. It is done when you shake the pan and the eggs don't jiggle. Slice and serve with a side of fresh fruit.

*I seasoned the potatoes with garlic salt, lemon pepper, and Italian herbs for more flavor.
**I used what I had on hand - 1 oz crumbled feta and 2 slices pepper jack cheese. This would be good with just about any kind of cheese - shredded cheddar, colby, monterey jack, parmesan, swiss, etc...
by Amy at 19:00 No comments: