As you thank the Lord for your family and your many blessings, take a moment to remember those who are not with their families this Thanksgiving.

*Pray for the safety of our Troops.

*Pray for the adoptable children who need the love of a Forever Family.

*Pray for those who have lost loved ones this year and must spend their first holiday season without them.
by Amy at 18:00 No comments:

Go to TheBlackFriday.com to find all Black Friday shopping ads as they are released!
by Amy at 09:00 No comments:

I joined the Amazon Associates program a while back, enabling me to earn points every time I refer someone to buy something. If you do any holiday shopping on Amazon.com this year, please go there using my customized link:

Polymathamy Amazon
by Amy at 07:30 No comments:

Turbaconducken
"a chicken stuffed in duck stuffed in a turkey, all wrapped in bacon"

Thanksgivings Around the World
surely you didn't think that the Pilgrims invented the holiday...

Thanksgiving Myths
tradition is too often historically incorrect
by Amy at 18:00 No comments:

Space Spider
astronauts on the International Space Station have lost one of their spiders
by Amy at 18:00 No comments:

I reworked the t-shirt scarf to make it narrower and longer. It turned out great! Still a little shorter than I wanted, but still very cute. 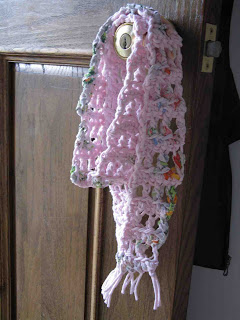 I wore my new scarf to work today. Had an eye appointment this afternoon and even the doctor complimented me on it! 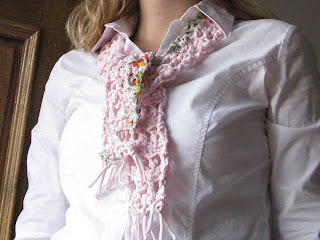 Email ThisBlogThis!Share to TwitterShare to FacebookShare to Pinterest
Labels: crafts

So I started making a t-shirt scarf. Monday evening, during my Monday TV lineup (Big Bang Theory and How I Met Your Mother on CBS, then Jon & Kate Plus Eight on TLC), I cut an old t-shirt in to half-inch strips using a rolling craft cutter and a couple of rulers. I will try to post pictures of the set-up.

I cut the strips almost all the way across the tee, but left it connected down one side. On that side, I cut from one slit up to the next instead of straight across, creating a long spiral of t-shirt material instead of a bunch of separate strips that I would have to sew or tie together.

Lesson learned: t-shirt material does not unravel, so there is no need to finish the edges; however, little bits of cotton dust go *everywhere* when you cut it...

Tuesday, I crocheted the t-shirt "yarn", but it was too short, so I will have to pull it out and do it again with a different stitch to try to make the scarf longer. It was really hard to crochet the parts that had printed design on them, and the whole thing ended up being much stiffer than I thought. I was really expecting it to be soft and cozy like the tee that it came from. I may try again another time with unprinted tees, and use a looser stitch to help the whole thing relax.

I will post an update by this weekend!
by Amy at 22:00 No comments:

Email ThisBlogThis!Share to TwitterShare to FacebookShare to Pinterest
Labels: crafts

Check out the t-shirt scarf by social studies (under "accessories").
I could make these!
I think I will!
by Amy at 10:00 No comments:

1600 Pennsylvania Avenue
other locations with our President's address

Math Jokes
for my fellow geeks

Hiroshima
The Lost Photographs
by Amy at 18:00 No comments:

Black Hole
be careful how you use it

Stealthy Shrinking
food containers getting smaller while prices go up

Swedish Dance Bands
from the 70s

Samuel Truett Cathy
story of the founder of Chick-fil-A

Batman, Turkey
the city of Batman is suing Warner Brothers

Presidential Code Names
code names from the Secret Service since Harry Truman ("General")
Let It Be Known
one U.S. Soldier's memories from Nazi slave labor camps during WWII
by Amy at 18:00 No comments:

Pumpkin Love
story of the love and loss of pumpkins

Lego Kitchen Crafts
hey Mom, can I have my Legos back?

Museum of Useful Things
beauty + function
by Amy at 18:00 No comments:

Senior Basketball Star
73-year-old Scores in College Basketball
by Amy at 18:00 No comments:

26Now an angel of the Lord said to Philip, "Go south to the road—the desert road—that goes down from Jerusalem to Gaza." 27So he started out, and on his way he met an Ethiopian eunuch, an important official in charge of all the treasury of Candace, queen of the Ethiopians. This man had gone to Jerusalem to worship, 28and on his way home was sitting in his chariot reading the book of Isaiah the prophet. 29The Spirit told Philip, "Go to that chariot and stay near it."

30Then Philip ran up to the chariot and heard the man reading Isaiah the prophet. "Do you understand what you are reading?" Philip asked.

31"How can I," he said, "unless someone explains it to me?" So he invited Philip to come up and sit with him.

32The eunuch was reading this passage of Scripture:
"He was led like a sheep to the slaughter,
and as a lamb before the shearer is silent,
so he did not open his mouth.
33In his humiliation he was deprived of justice.
Who can speak of his descendants?
For his life was taken from the earth." (Isaiah 53:7-8)

34The eunuch asked Philip, "Tell me, please, who is the prophet talking about, himself or someone else?" 35Then Philip began with that very passage of Scripture and told him the good news about Jesus.

36As they traveled along the road, they came to some water and the eunuch said, "Look, here is water. Why shouldn't I be baptized?" 38And he gave orders to stop the chariot. Then both Philip and the eunuch went down into the water and Philip baptized him. 39When they came up out of the water, the Spirit of the Lord suddenly took Philip away, and the eunuch did not see him again, but went on his way rejoicing. 40Philip, however, appeared at Azotus and traveled about, preaching the gospel in all the towns until he reached Caesarea.

38Peter replied, "Repent and be baptized, every one of you, in the name of Jesus Christ for the forgiveness of your sins. And you will receive the gift of the Holy Spirit. 39The promise is for you and your children and for all who are far off—for all whom the Lord our God will call."

40With many other words he warned them; and he pleaded with them, "Save yourselves from this corrupt generation." 41Those who accepted his message were baptized, and about three thousand were added to their number that day.
by Amy at 19:00 No comments: